Home
You are in:  Home » ﻿Research » International and comparative work » The European Network for the Comparative History of Population Geography and Occupational Structure 1500-1900

Our Research Blog (in French) contains all the details about our work and progress so far.

The COMMUNE HIS-DBD project will build the first historical-GIS capturing all changes in the boundaries of French communes since the Revolution and create a multi-modal dataset of transport networks from 1750 to the present.

It combines the strength and expertise of INED (team led by Isabelle Séguy), the Cambridge Group for the History of Population and Social Structure (CAMPOP) based at the University of Cambridge (team led by Alexis Litvine), and the ThéMA lab at the Université de Bourgogne (team led by Thomas Thévenin). It also counts with the technical expertise of the Institut National de l'Information Géographique et Forestière (IGN) and the active support of some of the most prominent European scholars in our Advisory Board.

Previous attempts have not succeeded in producing a reliable and accurate database of boundary changes mostly because they did not rely on historical records to reconstruct historical administrative units. As nobody has yet undertaken the painstaking historical reconstruction on a national scale the exact shape and delimitation of French administrative units in the past remain largely unknown. The unique combination of the historical and cartographic expertise of our teams will allow us to fill this major historical gap. Thanks to the seminal work by Séguy and Théré, who compiled a list of all boundary changes since 1801, we have devised a method to reconstruct historical administrative boundaries efficiently and accurately. We will be using a combination of historical and cartographic sources drawing upon administrative records, official maps from both the Service Géographique de l'Armée (SGA) and IGN, and other cartographic material such as cadastral mapping, and recent land surveys. Overall c.15% of all communes, will require exhaustive archival research all over France in order to digitise contemporary maps of administrative boundaries.

Figures (1) to (4): Georeferencing the commune boundary between Louvignies-Bavay and Bavay Over the years the Cambridge Group for the History of Population and Social Structure (CAMPOP) has developed significant expertise by reconstructing English and Welsh parish-level boundaries for the period 1831-1881 with sources scarcer than in the French case. The English and Welsh parish and place GIS is now the standard resource used by historians, geographers, archaeologists and economists for mapping historical data for England and Wales, and the GIS shapefiles that resulted from this work have been used by a great number of scholars in very different fields.

Thanks to a team of highly-qualified research associates and research assistants working both in France and in the UK we will put France on an equal footing with other European countries, and will unlock new fundamental comparative and quantitative analyses.

By the end of the research grant we will have produced the first and only set of GIS boundary data for all French communes from 1790 to the present linked to several key demographic, socio-economic and environmental data available at low level. Linking these data to fine spatial units through time and, critically, through them to each other will be a major breakthrough in the application of quantitative analysis of large datasets to French history. This will also enable us to compare spatial and historical variations in those key variables among several countries with a level of details and accuracy never reached before. Finally, our tool will be made available to the entire scientific community providing both transparency and traceability. Through a dynamic database linked to a set of annualised GIS shape files all historical records and maps used to reconstruct boundaries will be built in the data and accessible to all researchers.

Archival work and some case studies

Reconstructing historical transport networks in France, 1750 to the present

The existing geohistorical data on French transport infrastructures have been partially digitised by different institutions, with varying degrees of completeness: the railway network has been fully digitised from 1832 to 2015 with data on opening, closing dates and the evolution of technological innovation (electrification, rolling stock, high speed line…). The road network c.1750 has been digitised from Cassini maps (1750) by the COGIT laboratory at IGN (Perret et al., 2015). In this project we are: i) adapting existing railway data to fit to the much higher accuracy standards used for the GIS of French Communes; ii) digitising roads for two benchmark years (1830 and 1910). We use French military maps (Etat Major) for the period 1820 to 1866. For the second date, the 1900 maps (type 1900) digitised by IGN are our main source; iii) digitising navigable waterways 1700 to the present. The most consistent part of the data collection concerns French waterways. We use existing database of links, locks and tunnels, and complete it with data created by the Babel project. It includes construction dates, opening time and the technical evolutions for all existing canals. We complete this with data extracted from works by Delalande (1778), Grangez (1855) and Pinon (1886), allowing us to provide speed and cost assessment based on rights of way.

The French railway network since 1860 (Thévenin/Mimeur)

Building a multimodal model of transport accessibility in the long run

We are also creating homogeneous and comparable data on accessibility since 1750. This will greatly improve our understanding of the morphogenesis of transportation networks in France. In this way we will be able to quantify rigorously how changes in transportation networks contributed to spatial inequalities, and conversely we will be able to explore the extent to which public policy influenced network organisation.

The multimodal approach will allow us to combine microscopic and macroscopic analyses in order to look at the multi-scalar effects of spatial interactions. Combining roads, railways and waterways in the same model will help us assess the impact of innovations on territories suggested – but never quantified - by Dupuy (1991). We will provide measures of potential substitution effects and/or the complementarities of transportation networks. Finally, we will apply a morphological analysis of networks, in order to observe the impact of the co-evolution of transportation systems on population dynamics and notably emergence of centralities. These different hypotheses will be assessed by systematic comparisons between UK and France. 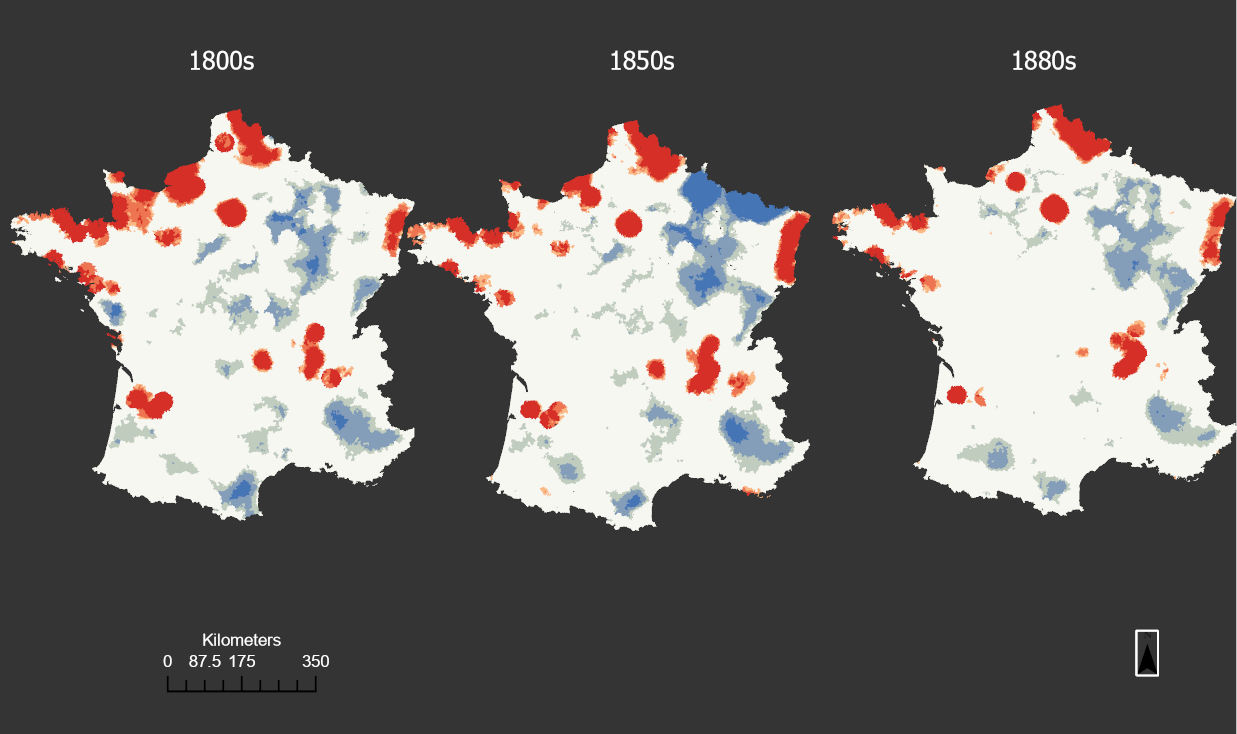 Description of the methodology

​Raphaëlle is a data manager. After studying history at Paris IV - Sorbonne, she chose to specialise in the management, conservation and valorisation of the archives. She spent the last two years working at the Archives Nationales, and she is passionate about the wealth and diversity of the archives. Over the next two years, she will be visiting 90 departmental archives! Her familiarity with the arcane arts of the archival world will be of invaluable help throughout our project.

Arthur is an historical archaeologist, geospatial analyst and current PhD candidate at UCL's Institute of Archaeology, investigating the development of transport networks in the UK and France and their relation to regional movements. Alongside his work with GIS, Arthur's research interests are in nationalism, identity, and landscape archaeology.

Christophe is Assistant Professor in CY Cergy Paris Universite, in the laboratory Mobility, Network, Territory, Environment. He is specialized in transportation geography. He has a geohistorical approach to qualify the interactions between space and network. He is interesting in the diffusion of networks according to population settlements, by the combinaison of network. He also works on the relationship between accessibility in low density space and public policies.

Hanae is an architect and urbanist who graduated both from the Ecole nationale d'architecture de Rabat (Morocco) in 2017 and from the INSA et ENSA of Strasbourg (France). She currently work on her PhD. in geography and urban planning at ThéMA (Université de Bourgogne - Franche-Comté, UMR CNRS 6049) with Claire Lagesse. Her thesis looks at the modelisation and simulation of road networks' morphogenesis using geohistorical data.

Doriane recently graduated in both history and DH from the very prestigious Ecole des chartes. She is joining the team to develop our data capabilities and expand her Master's research project on linking Ancien Regime parishes to post-1790 communes.

Gaétan graduated in Géographie et Aménagement from Paris 1 Panthéon Sorbonne. He joined the project as part of his Master's degree TMEC (Transport, Mobilité, Environnement, Climat) at the University of Bourgogne. His dissertation looked at the topology and evolution of France's inland waterways.

With just over 6,000 boundary changes in two-hundred years reconstructing French historical boundaries is a manageable task, and it will lay the groundwork for many future historical enquiries. Since we launched our pilot project in January 2018, we have been contacted by numerous colleagues working in diverse fields inquiring about our data. In some cases, we were able to supply boundary data specially recreated for their projects:

In all publications and online communications our datasets should be referred to as follows:

If you would like to use our data or request specific data for one of your projects please contact Alexis Litvine (adl38@cam.ac.uk).

You can also directly fill in the following form: