﻿ The Cambridge Group for the History of Population and Social Structure, Cambridge » Future plans skip to primary navigation skip to content

Home
You are in:  Home » ﻿Research » Transport » Future plans

Transport, urbanization and economic development in England and Wales c.1670-1911

Transport, urbanization and economic development in England and Wales c.1670-1911

One central feature of our Leverhulme/NSF funded project is to use data on occupational structure covering c.11.400 ecclesiastical parishes in 1817 and c.15,000 census parishes in 1881 to analyse the impact of changes in transport infrastructure on local economies, especially the development of the railway network from 1825 onwards and for a number of other purposes. Whilst being able to analyse economic change at this level of spatial resolution is entirely unprecedented, having only two observations some sixty-four years apart is obviously sub-optimal, and especially so given the rapid development of the railway network and the concomitant declining importance of navigable waterways. Thanks to the ESRC funded ICeM project led by Professor Kevin Schürer (University of Leicester) and Professor Eddy Higgs (University of Essex), it would now be possible, which it was not in 2012, with very modest additional funding, to add further parish-level occupational datasets for 1851, 1871, 1891, 1901 and 1911. 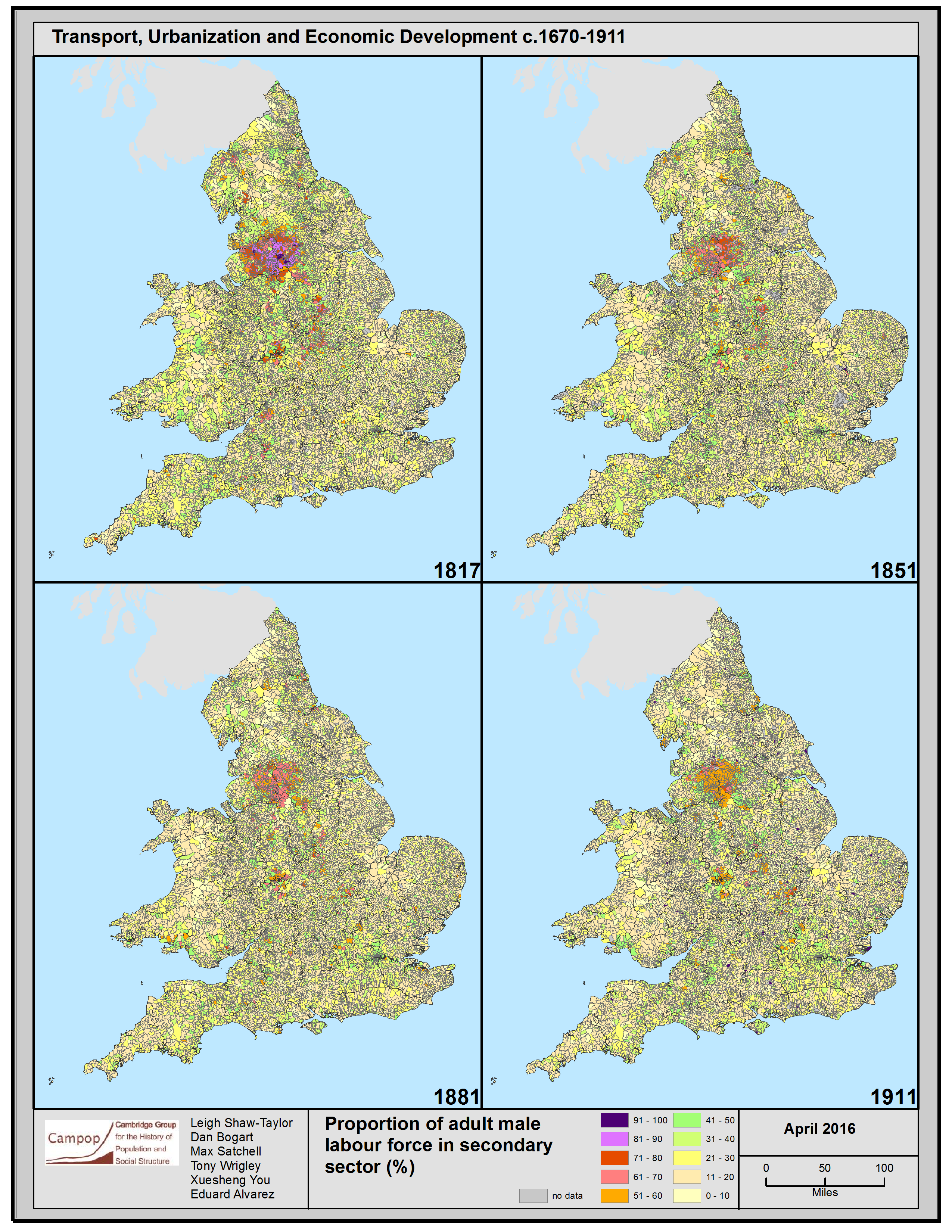 The maps above show the share of the male labour force in the secondary sector at four dates: 1817, 1851, 1881 and 1911. The reason that some further funding is required is that a very small fraction of the data from the ICeM project for each of the census years 1851, 1871, 1891, 1901 and 1911 is linked to the wrong polygon on the map. In each year this affects no more than about 0.5% of the c.15,000 parishes, though it is a different set of parishes in each censal year. It will be obvious from the maps below, each one of which is based on entirely independent datasets, that nearly all the spatial linkages are accurate. There is no other way the patterns could be so similar at all four dates. But, for analytical purposes we would still like to clean the datasets to avoid any spurious statistical effects and we would also like to ensure that any maps we produce accurately reflect the occupational structure of every parish. We have applied for some short-term funding from the Cambridge Isaac Newton Trust and if this is awarded we will be able, in collaboration with Professor Schürer to identify and correct the great bulk of the erroneous linkages reducing the error rate to a very modest level indeed. Perfection is beyond reach in linking 200m individual records to our boundary GIS but we can probably reduce the error rate to well below one record in a 1,000.

In addition to our original plan to use parish level occupational data to assess the impact of railways on the location of economic activity, if our current funding application is successful, we also will use the occupational data to model the parish level production and consumption of coal in 1851 and 1911. At both dates we have data on the tonnage of coal produced on each coal field. We will estimate parish level production of coal by distributing the coal field output to individual parishes in proportion to the number of coal miners in each parish. We will also experiment with using occupational data to help model the consumption of coal in certain energy intensive industries, most notably iron and steel production in conjunction with data on the location of blast furnaces from the Mineral Statistics in 1854 and 1911. This will be a component of a wider exercise intended to model the flows of coal around the transport network. Read more on estimating coal flows.